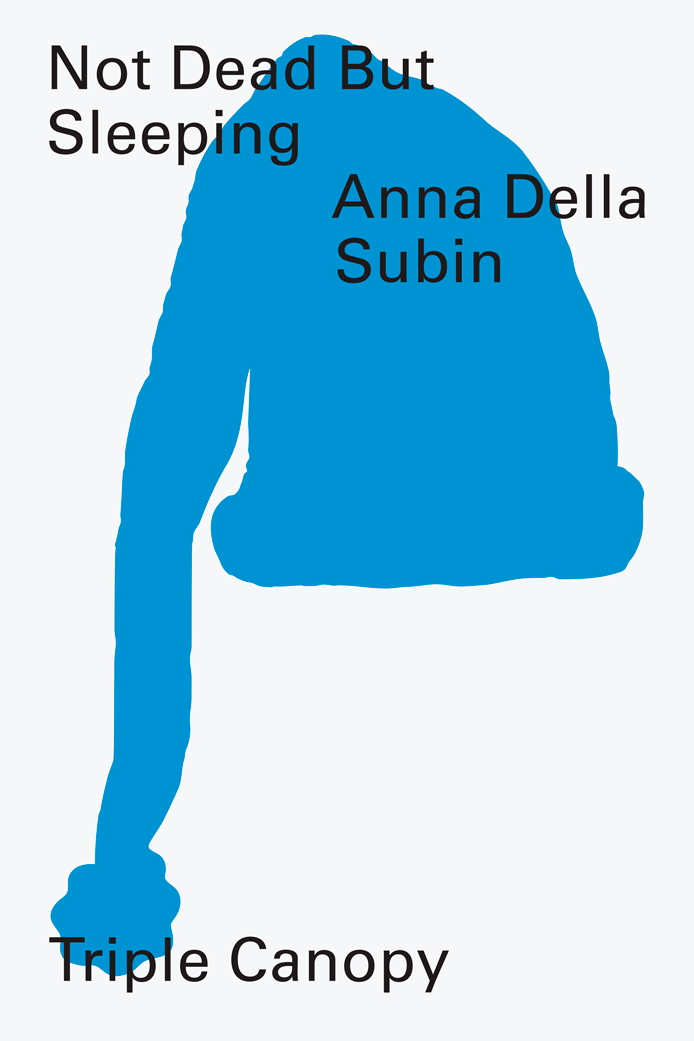 Written by Anna Della Subin, ‘Not Dead but Sleeping’ is a beautifully woven account of historically significant sleepers. With reference to stories from religious texts, contemporary plays and traditional tales, the book explores, amongst other things, the virtues of sleeping.

Why do you think we are intrigued by stories like the ‘Sleepers of the Cave’?

We’re drawn to these kinds of stories because they can be refracted in so many different ways, towards different ends, giving them an almost-miraculous universality. In its earliest Christian context the story of the ‘Seven Sleepers’ was told as a kind of proof that the resurrection of the dead is possible. In later, more politicized incarnations, it became a way to speak out against oppressive regimes, in face of censorship; to imagine a political awakening in which the tyrant has been overthrown. In sci-fi texts, it’s used as a way to speculate as to what the deep future will look like. But there is something about its contours that doesn’t quite add up as a story. A group of people who are escaping something flee into a cave, they fall asleep, they sleep for centuries and then wake up. Somehow it fails as a story, it’s semi-boring, which is why I think people continue to tell it—to try to add their own meanings to it. It’s mythical but also mundane. I’m drawn to it if only because of my own struggles with insomnia—309 years of sleep is inspirational to me.

Sleep is often associated with failure and wasted time but your writing explores sleeping as a conscious rebellious act, rejecting the expectation to participate in society or to be present during times of political upheaval. Do you think sleep can offer protection and moral preservation in times of political and social turmoil?

I do think sleep can be a kind of moral high ground— the superiority of those who sleep is something that is wonderfully articulated by the Egyptian author Albert Cossery in his novels. He writes about a character who has been slumbering for seven years: “Everything that happened around him was only illusion, vile conspiracies against the splendid web of sleep.” It’s a refusal to participate in the system, a way to preserve one’s integrity in a universe of corruption and injustice. And so sleep as a form of political resistance—along with its foot soldiers of laziness, idleness and procrastination—has had a long history. I’m not certain about it offering protection, though, as it is the most physically vulnerable state that a person, or any creature, could find herself in.

Sleeping and being absent from economic activity seems especially radical in our capitalist time, the image of the banker who hardly sleeps so that he can be awake for trading hours in foreign countries is one that comes to mind. Has capitalism and our 'global village' changed the meaning of sleep?

Absolutely. It began to change even as early as the start of the Industrial Revolution. Before artificial light, we used to sleep in two fragmented phases or segments, with a middle waking hour that people would use for all kinds of purposes—sex, writing poetry, committing crimes. Capitalism has changed our circadian rhythms, and continues to do so. In keeping with a time-is-money ethos, sleep—the socially acceptable kind—became consolidated into an efficient, uninterrupted 6-8 hour block, which actually may not be so naturally attainable. Now “sleep” has become a mode on our devices—a code word for what is never really switched off. Jonathan Crary’s 24/7: Late Capitalism and the Ends of Sleep brilliantly theorizes how the global village has created this “fraudulent brightness,” which attempts to radiate out everywhere, to expose and disenchant the dark corners of sleep. What do we lose? He quotes one of my writer-heroes, Italo Calvino who, not long before his death in 1985, remarked that humanity was losing one of its most basic faculties: the ability to bring visions into focus with eyes shut.

Many of the stories or accounts in your essays are religious, referring to verses in the Quran and accounts from the Christian tradition about sleepers of the cave. The sleepers are considered righteous people who, by the grace of God, have escaped difficult times and preserved their piety. In terms of vices and virtues do you think sleeping is virtuous?

Yes, at least in my own moral universe, sleep is a virtue. My favorite insomniac philosopher, Emil Cioran wrote, “Is the impossibility of sleeping the cause or the consequence of cruelty? The tyrant lies awake—that is what defines him.” It’s difficult to do any harm to another or to commit sin when you’re asleep.

The sleepers in many of the accounts you explore have not chosen to become unconsciousness but often, in withdrawing from society, have been induced into sleep- perhaps that is why we can perceive them as innocent and righteous. If we choose to sleep or consciously withdraw how would this change the act?

I think what you’ve pinpointed is the way the story of the sleepers is given different emphases in different contexts. In religious versions of the story, such as in the Quran, we see the hand of God at work—He lulls them to sleep; He diverts the path of the sun so it won’t shine on them. The act becomes politicized in the versions in which it is presented as a conscious choice to withdraw from society—sleep becomes a protest, a form of non-cooperation or non-violent resistance. This difference in the agency of the sleeper is often what inflects the story with piety or politics.

You also explore ideas of stopping time and procrastination as rebellion; how do you stop time and rebel in real life?

I’ve learned some excellent life lessons from the example of Albert Cossery’s grandfather, who, according to legend, used to lie in bed all day long with a black bandana tied around his head, in order to achieve the perfect darkness. Now I don’t travel anywhere without mine. When I wake up from a dream I like to grab hold of whatever details from it I can remember, the smaller, and more mundane the better. They become a rope pulling me backward, so that I can re-enter the dream and fall back asleep. Nothing is able to stop time the way a dream can.

I feel like your process deals a lot with the collecting of stories and ideas from different times and weaving them together; are you always on the lookout for material or do you set time aside for organised research?

I do set aside time where I focus only on research—I’m quite scholarly about it, in that I do in a literary nonfiction context the same research I might have done if I was pursuing an academic career. At the same time, I’m always looking out for material, usually across several projects at once. The hardest part is always deciding when to cut myself off—I love chasing after tantalizing footnotes, losing myself in labyrinths of references as I head in the direction of discovery. The poet Susan Howe, taking a phrase from Coleridge, describes the “library cormorant,” insatiable hunters who wait on the cliffs, with wings outstretched, scanning for fish. I’m very much one of this flock. But the question is always when to stop stalking my prey and force myself to write.

Your writing is very visually rich and conjures up many historical images and artefacts; how important is imagery in your process?

I’m constantly hoarding images, illustrations and ephemera, alongside my textual research. Most of it won’t make it into a published piece but it allows me to travel inside the imaginative world of whatever era I’m writing about, to see things that might otherwise stay hidden. I’m very inspired by old manuscripts and typography, not just words but how they were put down on the page. Susan Howe, again, is a big influence—in her essays on early American literature she gives close attention to the materialness of the original documents and the physicality of her own encounters with them in the library, often reproducing scraps of manuscripts and marginalia in her essays.

You are currently collecting accounts of other people’s dreams and nightmares, which feels like a natural progression given your interest in sleep. How have you gone about collecting the accounts and what do you intend to do with them?

It’s actually a project I’ve kept up for nearly a decade now. Originally it started as notes toward a book of essays about dreaming during times of conflict and war; to construct a sort of shadow history of these moments of rupture. There are two ways I’ve collected dreams—the first is what I come across in my reading. My daily diet consists of lots of early ethnographies, old travel narratives, theological texts, and scholarship in the history of religion. Whenever I come across a good dream, I save it in the “archive”— essentially a supremely oneiric Word document. The second mode of collecting dreams is in person, through conversations & interviews. For example, in 2011, after the revolution in Egypt began, I went to Cairo with Bidoun, the magazine where I worked as an editor, and one of my projects was to interview people about the dreams & nightmares they had been having ever since the uprisings started. Or in 2012, after parts of New York City were submerged under water following Hurricane Sandy, I recorded these very diluvial dreams that people were having, about a great flood.

Who knows whether I’ll ever write that book, but in the meantime the dreams will continue to accumulate, like snowflakes piling up in a storm, eventually burying me underneath.