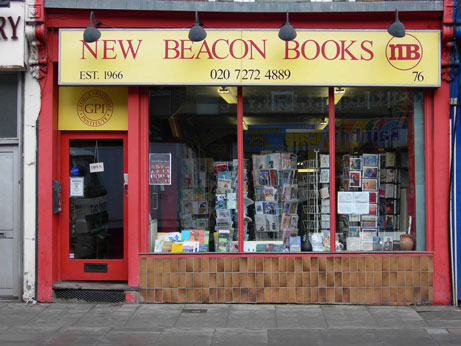 Black Books- The Story of Britain's First Black Bookshop from Arwa A on Vimeo.

To the many that knew him and know of him, the name of John La Rose is synonymous with independent radical Black publishing in Britain and the Caribbean. A committed trade unionist, cultural and political activist, and poet in his native Trinidad , La Rose came to London in 1960 with sophisticated ideas on the relationship between print, publishing, and politics formed by the anti-colonial political and cultural struggles taking place in the Caribbea

The power of British imperialism and colonialism stemmed not only from physical force, but from its ability to Name. Like the flora and fauna, the indigenous people of Britain’s “new” lands were cut, catalogued, and classified. This accumulated data assisted in consolidating Britain’s power and its ability to manufacture and regulate what was known about “Others” and through colonial educational practice, what they were allowed to know about themselves. The printing press, introduced to Europe in the 1400’s, become the machine through which these new narratives were recorded; publishers became the channel through which they were disseminated and normalised.

“The old publishing firms”, La Rose wrote to a friend in 1969, “[…] grew up within the colonial preferential market, and not only gave us the word but told us how to use it”. Having grown up within a colonial society, he had a vision of creating a tradition of publishing which gave “an independent validation of one’s own culture, history, and politics”. Publication, he wrote, “implies autonomy and initiative-the validation of ourselves. That’s why I founded New Beacon Books”.

John La Rose and his partner, Sarah White, launched New Beacon, one of Britain’s first radical Black publishing houses in 1966, from their bedsit in Finsbury Park. In doing so, they contributed to the momentum of radical Black activity and debate taking place both nationally and internationally. They were unique in bringing back into circulation books which were out-of-print or only available in the Caribbean such as The Theory and Practice of Creole Grammar by J J Thomas. Each book would become a declaration of New Beacon’s historical consciousness anew.

In the same year, La Rose, along with Barbadian poet, literary critic and historian Edward Kamau Braithwaite and Jamaica poet, novelist, academic and broadcaster Andrew Salkey formed the pioneering Caribbean Artist Movement (1966-1972). Using their moped, a Honda 50, as transport, La Rose and Sarah White sold New Beacon publications at CAM events, in addition to distributing colleagues and friend’s writing, or facilitating their requests for books. The Caribbean Artist Movement grew into a major artistic movement and assisted in generating a cultural resurgence among West Indians living in Britain. As a result of the demand for books that CAM produced, New Beacon grew organically through an informal distribution network into a booksellers and international book service.

Sarah White describes how the book-laden bedsit, the site of New Beacon activity for many years, gave way to larger premises and the addition of a shop front when they moved to No.2 Albert Road in Finsbury Park in 1969. While the third floor was rented out to a lodger and the second floor was used for living, the bottom floor of their new house was converted into a shop front for New Beacon Books. The shop/house became a local landmark for readers, thinkers and doers from all walks of life; it wasn’t unusual, said Sarah, to be disturbed late at night by someone hoping to buy a book. In the archives, several correspondents recall with fondness the kitchen table at No.2 Albert Road, a place of impromptu discussion and debate where new and important ideas were born around cups of tea.

New Beacon Books become a hub of local community activism, and as a smaller independent publishing initiative was able to play a vital role in the struggle Black people faced against police brutality, criminalisation, unemployment and racism in schools and workplaces in Britain. Among many initiatives, La Rose and White were part of the Black Education Movement in the 1960’s which agitated for better state education and founded the George Padmore Supplementary School for West Indian Children in 1969 in a converted classroom in the back room of their house. New Beacon’s first best-seller would be Bernard Coard's groundbreaking How the West Indian Child Is Made Educationally Sub-Normal in the British School System (1971). The nation-wide Alliance of the Black Parents Movement that emerged from the Black Education Movement would become “the most powerful cultural and political movement organised by black people in Britain”.

In addition to social and educational reform, New Beacon worked with Black publishing peers, Race Today Publications and Bogle L'Ouverture Publications in pioneering one of the most important financially–independent cultural events of its time, the International Book Fair of Radical Black and Third World Books (1982-1995). Introduced as a unique "meeting of the continents”, the book fair brought together people from across the globe concerned with the Caribbean, African and black diaspora to participate in debates, readings, films, forums in an exploration of links, visions and dreams.

As early as 1969 La Rose planned to open an educational resource for the growing body of archives and material relating to the cultural and political activity of New Beacon. In 1991, the George Padmore Institute, an archive named after the renowned pan-Africanist and internationalist, was opened above New Beacon Books now on Stroud Green Road. The collections include material which range in subject from the New Cross Massacre Action Committee, Carnival and the Black Parents Movement, to cassette recordings of scholar and activist Angela Davies talking in Cricklewood. The small family of staff and volunteers who work there are committed to sustaining a site of intergenerational anchorage in which indexical links to the rich imagined spaces and personal and social histories of radical Black culture in Britain can be found.

In the period of decolonisation and migration to Britain in which it was founded, New Beacon understood the importance of the role of the writer and the publishing industry in mediating a collective sense of the past. As a publishing house and booksellers, it developed into a fully integrated part of a small but powerful diasporic ecosystem with links ranging from the Notting Hill Carnival to the Oilfield Workers Trade Union in Trinidad. By choosing the path of slow organic growth over the temptation of institutional funding through which many bookshops eventually collapsed, New Beacon worked successfully to establish a form of autonomy within the British literary market. Re-appropriating the means through which identity, history and culture were produced, it handed information and the regulatory power of narrative back to Black communities. In doing so, New Beacon crafted innovative relationships between activism and print and bookshops as a site of education and spatial assemblage.